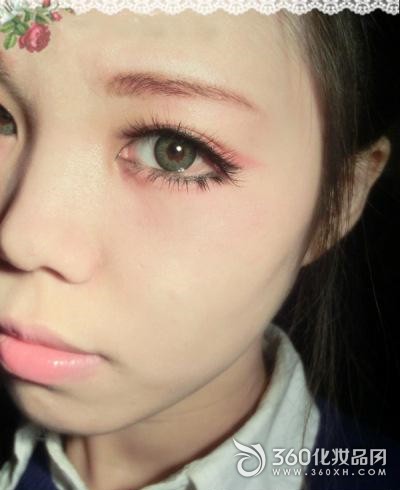 The following is a picture of the pink super cute Japanese eye makeup method, which can be easily done in 7 steps. Friends who like this eye makeup will continue to look down.
Pink Japanese big eye makeup method:
Step1: Draw the eyeliner, use a black eyeliner to draw the eyeliner along the root of the eyelashes. It is important to note that you should not lengthen the end of your eye and close your eye.
Step2: On the first layer of pink eye shadow, note that the eye shadow should be higher than your double eyelid folds, single eyelid MM will be higher than your double eyelid stickers, but also pay attention to the eye shadow to stretch beyond the end of the eye.
Step3: On the second layer of pink eyeshadow, the color of this layer is darker than the color of the first layer of eye shadow. It is mainly used to increase the deep feeling of the eyes, and also to extend beyond the end of the eye.
Step4: The effect of opening the eyes, the eye shadow at the end of the eye is pulled out, it is best to outline an upturned shape, so that the eyes will appear more spiritual.
Step5: Stick the false eyelashes. Note that when you put the false eyelashes, don't get too close to the eyes, so that the false eyelashes in the eyes are not easy to fly out, and the false eyelashes at the end of the eyes are slightly draped along the eye shape, which is innocent.
Step6: Draw the eyeliner. The lower eyeliner should be drawn beyond your own eyelids, so that the eyes will appear bigger, and the blanks at the end of the eyes should not be completely black.
Step7: Stick the false eyelashes and stick them along the painted eyeliner. This will make the eyes bigger and bigger. The same is true. Don't put too close to the eyes when attaching false eyelashes.
Step8: Draw the eye shadow of the eyelids. Just like the upper eyelids, you can choose pink eyeshadow. What you need is to choose a pink color with a lighter color. The three kinds of eye shadows used are the lightest.
This simple pink super cute Japanese eye makeup is completed step by step, is it cute and innocent, and there is, the red enamel on the apple muscles on the upper side, it looks more lovely. Do you like it?